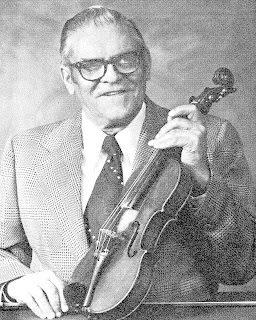 Talk to the old generation of Minnesota fiddlers and most of them have heard the tune Selmer Ramsey's Waltz. A few might say that he was a guy from up north. I was excited to find an actual out-of-print recording of the man. Selmer passed away 33 years ago.

From an out-of-print LP -

"Selmer Ramsey was born in 1914 in Highlanding Township, MN. His mother, Sophie Resla, was from Oslo, Norway. His father, James Ramsey, was from Albert Lea, MN. Selmer began playing the violin at the age of nine.
In 1937 Selmer married Ruby McEnelly of Goodridge, MN. They have one daughter, Jean, and two grandchildren, Jeffrey and Kristen. Selmer was a dance band leader for many years in the Goodridge and Thief River Falls area. At one time his band played regularly over KTRF, a local radio station.

Many of the tunes on this record are so old, they are only known as a waltz or schottische. Many were learned from his father James and his uncles Elling and Julius Ramsey, who were all from the Albert Lea area. There are also tunes which he learned from two local fiddlers, Ivan Sjuiestad and Ole Tharaldson. Selmer was also influenced by the old-time music played on radio stations from Winnipeg, Manitoba and Fargo, North Dakota (WDAY). He has several waltzes and schottisches of his own composition.
Posted by clawhammer mike at 10:47 PM