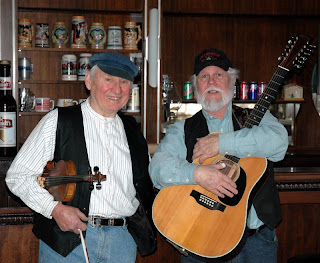 
Posted by clawhammer mike at 8:13 PM No comments:

I went to Cotton, Minnesota for the 30th annual Minnesota State Fiddling championships this August. The first thing you notice about northern Minnesota is the large pine trees and the super clean air. The air is a surprise every time I am up there. For those of you who have never been to Cotton, the festival is held an an old school house and a community center. I went up there hoping to find a half dozen older Minnesota fiddlers, but was not surpised to hear the same mantra I have been hearing, "You should have been here 15 years ago, they've all died." The two who I could've interviewed, Gilmore Lee and Lee Cowan live close enough to me that I didn't have to go up to Cotton to interview.

It was a beautiful day until the moment we pulled into Cotton. We finally caught up to the storm we had been seeing for hours and it proceeded to rain for most of the weekend. It was fun to meet the great Lloyd Laplant from northern Minnesota. He is a fine instrument maker whose instruments have a following throughout the country. He said he would try to set me up with some Minnesota old-timers to record, but he admitted that most have passed.

It seemed to be a well run contest, but I was surprised by the utter lack of jams. I hear this is different than in the days of yore. I sat my chair out in front of the school the first night and decided to jam by myself. The contingent of Thunder Bay, Canada folks seemed to outnumber Minnesotans. A couple of those folks were dismayed by the lack of jamming, but never made it back over to jam with me that night. As the night went on we enjoyed the presence of two young folks who worked at a music store in Fargo, North Dakota. They explained how they travel with their wares to all these small festivals and never sell very much, but hope their name gets out there. They seemed to just like the road trip and a chance to drink and share stories with strangers.

I finally convinced some Thunder Bay folks to jam with me under their awning in the rain. We played for several good hours and the only time I got a little lost was during some fast Canadian two-steps. Jack Hill was a great guy to meet, and he placed in the Senior division. We talked about everything under the sun, and it was a pleasure to see him the next week at the Minnesota Bluegrass and Old-Time Music Association hundreds of miles away. He has the same issues with losing feeling in his fingers when playing as I do and had to start bowing with his other hand which is amazing to me.

The only thing that saved the weekend besides the great jam Saturday morning was meeting 84-year-old Chester Enger of Hixton, Wisconsin who has been a mainstay at the festival for many years. He played a great archaic version of Life In The Finnish Woods. Afterwords, I went up to talk to him, and he told me the same three stories at least four times in about 5 minutes. He could remember tunes quite well, though. I asked if I could record some tunes from him and he gave me the best answer- Why would he let me record his tunes when he could go home and record himself. I guess that settled that then and there!