Paul Dahlin is probably the most famous fiddler in town, but you may not have heard of him, unless you are Swedish or pay close attention to the arts. He was a National Endowment for the Arts Heritage Fellow in 1996, performed at some of the country's biggest folk festivals and put out recordings on prominent folk labels, such as Rounder. His story is well-documented on his website, where you can also buy his CD's. I felt really lucky to get to interview Paul for this project.
( Sorry about the darkness and quietness in this video. It was a rather intimate setting).
On my way to interview Paul, the first thing I noticed was how tranquil and peaceful his neighborhood in south Minneapolis felt. Upon entering, I noticed his makeshift woodshop in his living room. The first thing I thought of was how my Swedish stepfather would have felt very welcomed by this sight. That thought was reinforced later when I heard the story his family told him about going to America" You are going to America to work, not to play fiddle".
Luckily for us, he did come to play fiddle and taught his children, who taught the next generation, who taught the younger generation who are alive right now. Four generations of their family have fiddled here in Minnesota. I love the story about how Paul's son Daniel still goes to play with Paul's uncle Bruce and that Daniel is the one who really embraces the old tunes (along with writing some new ones).
This project of mine started with the questions as to where all the fiddlers went to. In my interview with Paul you hear about one great place they went to. Every Friday night they congregated at --- of Cedar and had a dinner and a lively dance. When Paul was describing it, I swear I was right there. I didn't remember until after I left Paul's house that my stepfather pointed out that old Swedish hall as we passed by there years ago.
Even though the traditions are firmly entrenched in his son, he uses the word "fragile" to describe the music's place in modern society. Thankfully, Paul and his family has been committed to teaching this music to hundreds of folks over the years through his partnership with the American Swedish Institute. This is one Minnesotan fiddle tradition that is properly preserved and nurtured.
Posted by clawhammer mike at 12:09 AM No comments:

My Teacher Don Paden and the Cotton Tapes 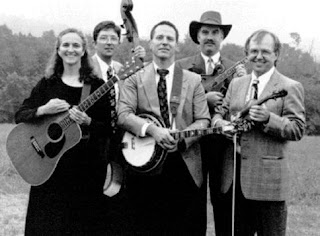 My teacher was the one who helped get my family into old-time and bluegrass music. He and my stepfather ended up being in the same band and my mom did sound. Don was the one who let me hear his Dock Boggs and Roscoe Holcomb records which influenced me greatly. He was always playing various instruments in class and singing old songs, but never too much with a fiddle.
Not so coincidentally, the great competition-winning clawhammer banjo player Adam Hurt had Don as an elementary teacher, too. Here is a quote from Adam, "I was first made aware of folk music by Don Paden, my homeroom teacher in a Saint Paul, Minnesota public school. Don played several folk instruments: mandolin was his favorite but he also played fiddle, guitar,and others. He regularly brought these instruments into his classroom, to show his students an art form that we had likely never known". Don's passion for the music was clearly contagious. The picture above is Don playing fiddle in String Fever Bluegrass band in 1990's."
I started going through and digitalizing all of the old Minnesota tapes that Dan Radford let me borrow on my last visit. I was not more than 15 minutes into the first tape when out comes, "our next contestant from Saint Paul is Don Paden, accompanied by Bill Hinkley", from the 1992 Cotton fiddle contest. What made it extra special is that Bill Hinkley is a local old-time legend who recently passed away.
Don Paden. Cotton, MN 1992.
Bill Hinkley. Cotton, MN 1992.
I am assuming that when it was Bill Hinkley's turn, Don was accompanying him. Don was a student of Bill's at the time. Here is a few of the selections that both men play.
Posted by clawhammer mike at 9:58 AM 1 comment:

When I first heard that we were going to have a fiddle flash mob here in Minneapolis, I was worried that we were going to be raided by the police (OK, not really). I am lucky enough to live in a place that has three old-time mountain music jams I can go to each week, and we don't even live near any mountains. Most of the tunes played at these jams are Appalachian, except for the occasional polka or Canadian tune.

Today's flash mob was organized by Pam Longtine and her husband Doug Heine. The premise was simple: city park, fiddles, potluck. A very simple and brilliant concept. The event was attended by about 40 people and a good time was had by all. We are are well accustomed to this kind of atmosphere. Normally we would travel hundreds of miles and pay lots of money to go to festivals, only to skip the stage and play with each other in the back 40. It is like a small extended family- everyone is always offering me food or alcohol.

Usually if a jam gets too big, the elder statesmen and women break off and start their own jam. They don't mean any harm, I think it is just what's comfortable for them. They were nice enough to let me record a few songs. One of these elder statesmen is John Wallace. He just got done winning the gambler's fiddle contest at the Minnesota State Fair. The rules are that the judges give you a tune and you have to successfully play it. If you can't play it, you are eliminated and the last one remaining wins. John has won this contest several times.

I could say equally great things about all of the local fiddlers in these videos. They are from left to right in the first video: Robin Fox, Pam Longtine (seen later in video to the left), Don Jacques, John Wallace, Roger Cuthbertson, and Erik Platt on guitar.