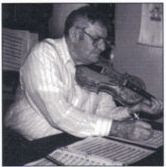 Just before the state fair I called Dee Scott at the Minnesota State Fiddlers Association. Even though it sounded like she was doing about 10 things at the time, she took time out to talk with me. During the course of our conversation, she told me that she had an Elmo Wick tape that she would copy for me. She said I would have to wait for a couple weeks because she was off to the fiddle championships at the Minnesota State Fair. No more than two days later did the mail come with that tape. Bless her heart.
Elmo Wick was a Minnesota fiddler from the town of Brooten. Brooten is located in the middle of the state, west of Saint Cloud. He was one of the three founding fiddlers of the Minnesota State Fiddle Association. In the newsletter accompanying the letter below are pictures of Elmo transcribing a fiddle tune to paper. This is fitting, as this was one of his favorite things to do. The MSFA currently has possession of his sheet music.
Below is a history of the MSFA he wrote for the organization's newsletter:
Letter to the MSFA, from Elmo Wick (edited)

A big thanks to Dee Scott for a fine job of writing the newsletter and also to Dan Radford, president, and Gilmore Lee, vice-president, and all of the other officers and directors for keeping the MSFA alive and well.

I am sending Dee all the information on how the MFSA started. For those of you wondering how the fiddlers’ association came into being, I asked Lloyd Eisert and Gilmore Lee at the concert in Annandale, in August of 1986, if they would help me start a fiddlers' association for the state of Minnesota, and they agreed to do so.

I used my own time and money to buy stamps. I looked for a place to meet in the center of Minnesota and asked some of the fiddlers that I knew if Saint Cloud would be OK. So I drove to the Holiday Inn in Saint Cloud in September of 1986 and rented a meeting room for the afternoon of October 26th.

My wife Melba and I wrote letter to sixty fiddlers in Minnesota to invite them to the meeting. At the meeting we elected our board of directors and our officers. The Holiday Inn made an offer to me- If I could sell 25 noon dinners that day, then we could use the room for free. Twenty six dinners were sold, so that saved me some money.

The meeting was a great success. Lloyd Eisert was elected president. Sid Kjeldahl was elected treasurer, and Gilmore Lee and I were elected directors. Michele Kolbrek suggested the name. I wish the word “old-time” would have been included in the name because I really want old-time fiddling to live forever.

I donated $100 to the MSFA for expenses. I also played at the county fairs with the South Dakota Fiddlers and gave the profits I earned to the MSFA. In 1989 Lloyd Eisert turned in a bill for mileage expenses and a phone bill for $485. That left the MFSA in the red. We were lucky to have Sid Kjeldahl take over and save the MFSA by putting on programs in Long Prairie once a month for three years. By charging $2 a person and donating it all to the MSFA, we got out of debt.

Another fiddler who has done a lot for the MSFA is Gilmore Lee. He has donated lots of driving, playing time, and phone calls. He has done this all for free. I also fondly recall all of the donations made by Archie Teigan and Howard Borgerding. I also am sending Dee two tapes of Alan Erickson and I playing old-time fiddle tunes, along with two tunes transcribed for the newsletter.

He was born Aug. 27, 1924, in Sunburg, MN to Andrew and Esther (Erickson) Wick. He grew up in Sunburg where he attended school.

He married Melba Gunderson on Sept. 12, 1945, in Sunburg. They moved to Willmar, MN in 1947 where he worked for the Kandiyohi County Highway Department as a heavy equipment operator for 37 years. He retired in 1983 and moved to Brooten in 1985. He was a member of Vinje Lutheran Church in Willmar and Trinity Lutheran Church in Brooten. He played the violin with Morris Chargo on a weekly show on KWLM Radio. He later played with the Harry Forsman Band and the Norskies Band and entertained in later years at various senior citizens' clubs and numerous functions. He taught violin and played in fiddlers' contests throughout the state.

Posted by clawhammer mike at 2:36 PM