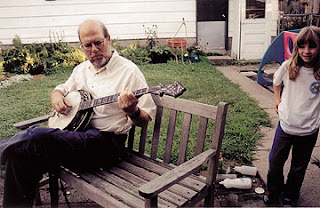 In the late 1980s Phil Nusbaum took his tape recorder all over Minnesota to do field recordings of traditional music played by Norwegian immigrants to Minnesota. The album that came from it is: Norwegian-American Music from Minnesota Old-Time and Traditional Favorites. The record came with an informative 15 page booklet that provides a lot of history and context for the album.

I did not have a copy of his record so I went to Ebay and picked up a unopened LP for $9.99 that came with the booklet. What a great document of Minnesota history that package is. In the end of the booklet he asks a question about the future of Norwegian music in Minnesota. Will it continue to fade away as he saw it or would it grow into new form that could again blossom? That question in a broader sense is what started my project. Can we reshape all of this lost cross-cultural repertoire into something uniquely Minnesotan that more people could be excited about again?

The first time I talked with Phil about this project I asked him about living folks. He told me that most have passed on, which I knew. Then I decided to ask him about tapes of certain fiddlers who have passed, and I was surprised to hear that he still had tapes of all those folks he recorded in the '80s.

The ironic thing is that I have travelled through the state looking for this music and the real treasure trove of recordings was no more than a half of mile from my house.

When I showed up at Phil's house he took me into his music room and there on the top shelf of his closet was a dusty bowl full of these recordings. Many fiddlers who I was looking for were there. As he went through the tapes he explained various aspects of his project and told me about the artists. Someday soon I will go back and interview him properly with the recorder. I am going through those old tapes now and will be sharing with you some of the tunes as this project moves along.

Bill is the host of 2 weekly shows. The Bluegrass Review is his nationally syndicated weekly radio show, and you can listen to him locally every Saturday hosting Bluegrass Saturday Morning on KBEM.

Here is one of the tunes Phil put on his Norwegian album. The band is the Erksine Old-Timers. Most of the members were up in age at the time of this recording. Erksine is a little town up in Northwestern Minnesota. More on the Old-Timers in a future blog. This tune will probably make it in the repertoire as many Minnesota fiddlers were playing it.

Posted by clawhammer mike at 9:55 AM