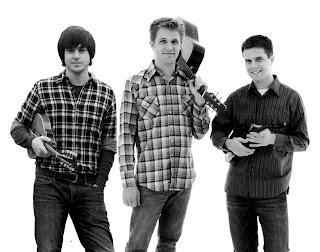 Brian Miller and Friends are another group I somehow left out of the liner notes on The Minnesota Fiddle Tunes Project CD.  It is a shame, because there is no more stronger an advocate for the reclamation of songs played in Minnesota than Brian.  His particular interest is in the songs of the old Irish lumber camps up north. Here is their bio (which I now don't have to edit for length to fit in a booklet.) -

Milwaukee-based tenor banjo player Randy Gosa has studied with several top Irish music masters including Liz Carroll, SiléShigley, Andy Irvine and Tony Nother. He also studied music at the University of Limerick, Ireland with Niall Keegan and Sandra Joyce. He tours nationally with the innovative Celtic group Murzik. In addition to being a string musician for over 15 years, Randy is a graduate of Visual Art and Celtic Studies from the University of Wisconsin-Milwaukee. He is also an active céilí and set dance musician in Milwaukee and teaches at the Irish Fest School of Music.


Fiddler Nathan Gourley hails from Madison, Wisconsin, where he grew up in a musical family that often traveled to folk and fiddle festivals across the country. Now based in the Twin Cities, Nathan puts his passion for Irish music into practice as a member of several groups including The Two Tap Trio and The Máirtín de CógáinProject. He also performs frequently with Irish accordion legend Paddy O’Brien. These days, Nathan can often be found at the MSP airport en route to many yearly excursions to Ireland, New York, Chicago and other hotbeds of traditional Irish music

“The backing of Brian Miller on guitar flexes not just muscle but a fully complementary style” writes esteemed Irish music critic Earle Hitchner.  Brian’s guitar accompaniment is the backbone of nationally touring Irish music group Bua.He has performed throughout the US and in Canada and Ireland. In Ireland he has been featured on TG4, RTE television and RTE radio. In 2010, Brian received a grant from the Minnesota State Arts Board to fund Minnesota Lumberjack Songs, a CD of Irish-style songs that were once sung in Minnesotan lumber camps. He continues to energetically research the history of Irish music in Great Lakes logging communities. He frequently performs “Irish Music from the Lumber Camps” with Randy at venues around the Midwest.

Posted by clawhammer mike at 10:45 AM