On the new Minnesota Fiddle Tunes Project's liner notes, I somehow left out one of my favorite duo's in Minnesota.  Bob and Gail did play Gary's Polka on the disk and here is their bio that should have gone with it. Pretend that it is in the booklet- 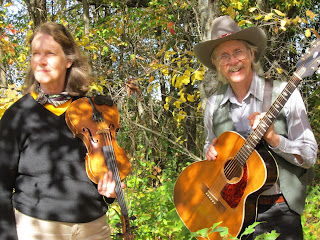 Gail Heil learned to fiddle in her native Missouri, but when she moved to Minnesota she found tunes with a very different sound. Gail and Bob met Bill Sherburne in the late 1980s after they had moved to southeastern Minnesota, and learned “Gary’s Polka”, also known as “Old Time Banjo”. Sherburne was a master fiddler from Spring Grove and was one of the musicians who had represented Minnesota at the Smithsonian Folklife Festival in Washington, DC. The tune is in the keys of C and F. For more information on Bovee and Heil: www.boveeheil.com
Posted by clawhammer mike at 9:00 AM